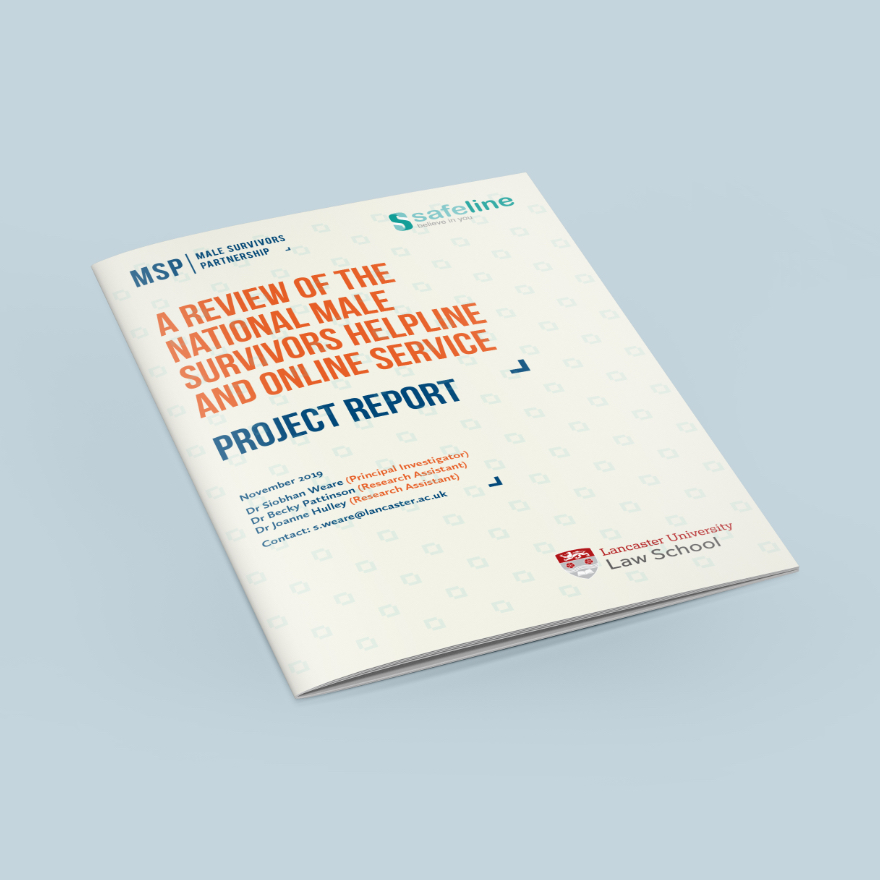 “It was immensely helpful, feeling that I was heard and understood” – Male Survivor

Last week’s sentencing of Reynhard Sinaga, the most prolific convicted rapist in British history, who preyed on largely straight men in Manchester, was shocking and destroyed the myth that only women are raped and sexually abused.

Now, a call for a complete review of national support services for male survivors of sexual violence and abuse has been made following a study by Lancaster University, launched today. Read the report here.

The comments are made in a 40-page study carried out by Lancaster University for the Male Survivors Partnership.

The study reviewed The National Male Survivors Helpline and Online Service (NMSHOS) run by sexual abuse and rape charity Safeline, based in Warwick, and funded by the Ministry of Justice.

The NMSHOS is the only dedicated national helpline to support male survivors of sexual abuse and rape.

The aim of the NMSHOS, who offer telephone, email and text support, is to provide a ‘listening space’ for male survivors and those supporting them, and to provide practical and emotional support to help with the emotional, psychological, social, relational, financial and physical health difficulties that men can experience as a result of sexual victimisation.

The research reveals how a lack of male support service provision can make survivors feel as if they do not deserve to speak about their trauma and highlights how accessing support can be a ‘post-code lottery’ with a complete lack of support in certain geographic areas.

The research also highlighted long waiting lists for services which, said the study, was a regular source of distress and frustration for male survivors.

The study suggests a national review of male survivor support provision should be undertaken to identify areas where there is no support and where waiting lists are extensive.

Data analysis revealed the telephone helpline service has seen a 199 per cent increase in calls between 2016 and 2018, with the majority of callers discussing non-recent abuse.

The research highlighted how male survivors preferred to access telephone support for various reasons including talking through suicidal feelings and thoughts and for reassurance, support and signposting to other services.

And, despite an increase of 37% in the opening times of the service, the research revealed increasing demands on the service from both new and repeat callers who wanted to take that first step to recovery.

The research also calls for increased funding to allow for increased service capacity, and to maintain the high-quality support currently provided to clients.

“There are a number of reasons why demand for the helpline services continues to increase,” explains Dr Siobhan Weare, who led the research project.

“The profile of the NMSHOS has increased since it was launched, with it being featured in relation to high profile male survivor storylines on TV shows such as Coronation Street and Hollyoaks, as well as in national news coverage.

“Male survivors may also prefer accessing support via the telephone or online or there may be a lack of face-to-face counselling service provision for men in their local area.”

This research was commissioned by the Male Survivors Partnership and funded by the Home Office.

Commenting on the report, Duncan Craig, Trustee and Joint National Strategic Lead for the Male Survivors Partnership, and CEO of Survivors Manchester, said: ‘As the first national service for male survivors, the NMSHOS has enabled thousands of men and boys to speak about their abuse to trained specialists who will help them consider their options for support.

“The helpline services play a critical role in supporting male survivors, their families, and their friends. Male survivors should be offered a choice in the type of service they wish to access (e.g. face-to-face counselling, group support, or telephone/ online support). This can only happen if all services are properly funded across the country.”